Conventional wisdom tells us stiffer-soled cycling shoes are better than softer ones. Something out Power! and Efficiency! and Being Pro!

My main focus when setting up my bike are the contact points: grips, saddle, tires, pedals, shoes. I ride flat pedals more often than not, and lately I’ve been experimenting with my shoes. I know the prevailing trend in cycling footwear is stiff and stiffer, even in a lot of shoes geared for flat pedals. I question wether having the stiffest footwear is the most optimal way to rip your bike. I became inspired by watching footage of Josh Bryceland, taking note of how involved his hips and body were in getting his bike to move around. I also noticed how flexible his shoe choice was, it seems at some moments his feet absolutely fold over his pedals. So I began to think whether my mobility and bike control were being held back by my relatively stiff choice of footwear (5.10 Impacts).

So I got a pair of 5.10 Aescents, not a cycling shoe, but sticky rubber, and way more flexible than the Impacts. My ability to use my body and hips on the bike and especially in the corners increased noticeably. By effectively activating my feet instead of limiting their movement I gained way more control over the bike. My rides have tons of long climbs, and according to my stopwatch I lost nothing in terms of climbing speed, and in fact I felt like I could drive more force into the pedals increasing power with a more flexible sole. I am obviously in the minority on this, and there are people with access to wind tunnels that I don’t have, but my question is why? Why are we obsessed with stiffness and the perceived power transfer, when there are other things that are perhaps more important? As Shakira says “My hips don’t lie.”

Thanks for the great question. I’ve been wondering similar wonders.

First the video. Josh is fun to watch!

Last week I brought this up with Brian Briggs, a sports medicine specialist at the Boulder Center for Sports Medicine. He and I enjoyed a great chat. Some thoughts:

Your feet are neither dumb platforms nor static levers. They contain lots of joints and muscles and nerves, just like your hands. They are complex and smart — and they are wired into your entire neuromuscular system. The more control and strength you have in your feet, the better the system works. That’s why Brian encourages his patients to train with bare feet.

The way I understand pedaling, you should drive force from the ball of your foot directly into the pedal spindle. When you leap over a car that’s about to smash into you (as I’ve done on my road bike — whew!), do you jump off your heels? Do you jump off your arches? No: You launch off the balls of your feet.

When you pedal you should also fire through the balls of your feet. When you shred (corner, pump, hop, jump, etc.) it should be the same — but even more dynamic and powerful. I know some people believe in mid-foot pedal and cleat placement, but the human animal is designed to explode off the ball of the foot, and I think this is how most of us should Ride (capital R).

If you watch Josh closely, his feet move around on the pedals. But he’s an elite talent with a unique riding style. I don’t suggest copying him.

The part of your shoe that’s between the ball of your foot and your pedal should be stiff enough to support pedaling and Riding forces. The rest of the sole can be soft enough to help you walk, hike, run, jump and shred — and it won’t hurt your pedaling power. 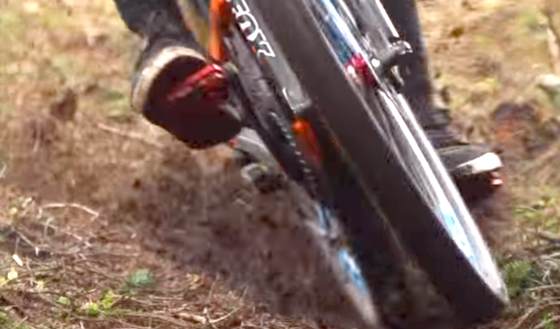 Check out the pressure on the ball of Josh’s right foot! 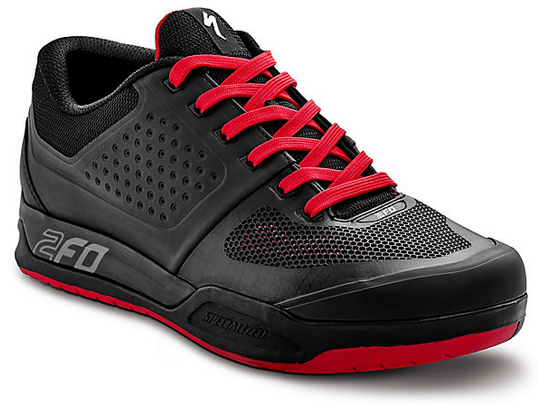 The 2FO is made for aggressive riding: hiking unrideable sections, pedaling up mountains, sprinting out of start gates, carving corners, pumping sine waves of love and all that good stuff. It’s comfortable, walks/hikes/runs/jumps like a real shoe and is not hurting my pedal power. Heck, I’ve hit almost 1,800 watts in the 2FOs.

Specialized gives its shoes a stiffness index. The S-Works XC shoe is a 13. The 2FO is a 6. Guys like Curtis Keene, Mitch Ropelato and Aaron Gwin are pedaling just fine in their 2FOs, and the greater flexibility of the shoes might help them perform like the human animals they are.

Why are we obsessed with stiffness and the perceived power transfer, when there are other things that are perhaps more important?

I’ve worked closely with thousands of riders. Until they learn better (see the Pump Up the Base fitness and pedaling program), most of them pedal almost entirely with their quads. Their hips aren’t firing, and their ankles and feet are static. When you pedal like this, you’re treating your foot like a dumb platform. In this case, a shoe that supports your whole foot might feel better.

There’s more glamor and profit in selling items that deliver InstaPerformance™ than in teaching people how to move optimally. Very few companies — and even coaches — know or care how bodies and bikes should interact. It’s easier to sell quick solutions.

Be nice and kick ass,

Must-do-list before building the pump trackLesley Paterson: a professional at work
Scroll to top