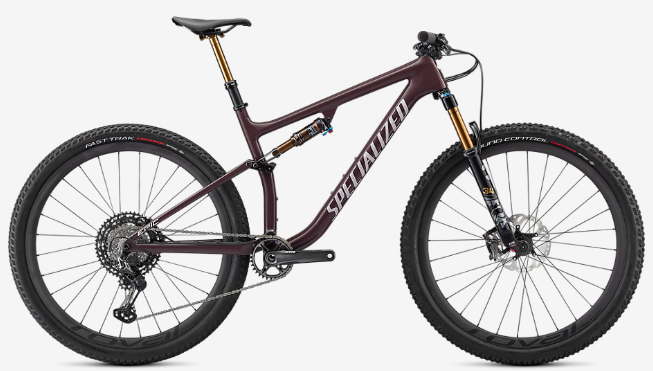 Since 2002 the Epic has been Specialized’s XC race bike. It features “Brain” technology which, put simply, discerns the difference between bounce forces coming from the rider (due, say, to sloppy pedaling) and bump forces coming from the ground (due, say, to smashing through a rock garden). When forces are coming from the rider, the fork and shock are firm. When forces are coming from the ground, the fork and shock are soft. It’s like having a lockout lever that reads body English and terrain.
It’s a very effective system, as proven by many racers who crave external validation and even more recreational riders who crave efficiency (and to own the best of the best — the S-Works Epic is the official bike of the American Dental Association). 🙂
What’s the drawback of the Brain? I rode the very first version before it was in production, and I can tell you that the transition between firm and soft has gotten a lot smoother, but the bike has two distinct modes, each with its own personality and handling traits. Cornering with the Brain open and closed, especially in a rough turn, are two different (and sometimes surprising) experiences. The Brain is perfect for World Cup XC. Less perfect for all-around trail shredding.
The Epic EVO is Specialized’s acknowledgement that not all Epic owners race, and that a lot of people want a fast/efficient bike that also shreds. The newest Epic EVO is slacker than the regular Epic, has 120/110mm of travel vs 100/100mm, and it has no Brains. In the Brain’s place are a regular shock and fork. The kinematics of the frame provide pedaling efficiency; the standard shock and fork provide consistent behavior.

I rode the 2021 Epic EVO Pro in size medium. Retail price is $8,250. Salient features:
FACT 11m full carbon frame. Not as fancy or light as the S-Works version, but still very fancy and light. This one is a dull, cool purple-ish color.
66.5-degree head angle. Much slacker and more stable than a typical XC bike. Way less floppy and plow-ey than a typical enduro rig.
Full XTR group. Hell yeah. Game on. The brakes are so good! And the shifting … it’s as perfect as shifting gets.
FOX suspension. The fork is a FOX FLOAT Step-Cast 34 Factory with 120mm travel. The shock is a FOX FLOAT DPS Factory 190x40mm. Both the best of the best.
FOX Transfer post. The medium’s drop is 125mm. That seems like a lot for an XC racer, but for this gravity guy it’s not enough.
The Body Geometry Power Expert saddle is actually comfortable. It’s rare that “down there” feels that good.
Light/fast tires. Ground Control in front. Fast Trak in rear. Both 29×2.3. Both with the magical Gripton rubber (it both rolls fast and grips in turns; crazy). Both with Control casings, which provide cut resistance while still being light. These tires roll so much faster than what I’m used to! And they grip a lot more than I expected. Especially in steep sand/gravel.
Badass Roval wheels. DT Swiss 350 hubs are proven and perfectly forgettable. Roval Control Carbon rims with 25mm inner width are light and strong. I’ve been on Roval carbon rims for years with no problems — even when a guy parked his truck on my wheel, the wheel was perfect.

WHAT I’M USED TO

My current daily driver is a 2019 Stumpjumper, size medium. It’s been pushed to ~155mm rear suspension and 160mm front suspension, both via DVO. It has light wheels but heavy tires: 2.6 Butcher GRID in front and 2.3 Eliminator Black Diamond in back. It enjoys a mix of XT and XTR parts. Its FOX Transfer seatpost has 175mm of drop, which I’ve become very accustomed to. In terms of suspension travel and geometry, this bike is somewhere between a Stumpy and an Enduro.
Since Covid I’ve been riding two places:
1) Valmont Bike Park in Boulder, CO. I teach classes there, and I ride there all the time on the dual slalom, dirt jumps and slopestyle.
2) Left Hand Canyon OHVA. Just north of Boulder, Left Hand is the gnarliest of the local gnar. The climbs are freaking tough. The descents … are not XC. They are steep, loose, sometimes rough and occasionally above my head. Left Hand is Full Enduro all the way.
Even though the bike is made for XC trails, I decided to ride it at my normal spots.

Whoa it’s light! I didn’t get an official weight, but we’re talking low twenties. 10 pounds lighter than my “StumpDuro.”
Cockpit. I removed the stock 60mm stem and S-Works bars and installed my own 35mm stem and a pair of SQlab 30x 16° bars. This 1) gave me the extra backsweep I like and 2) shortened the reach/RAD to perfect. (At 5’8″ tall with finicky shoulders, I find the 436mm reach to be a bit too long).
Holy hell, it climbs great. From the moment you turn a pedal the bike is like “Right on! Let’s go!” The smooth Fast Trak rear tire got great traction, even in loose sand/gravel/rocks, especially with the shock in open mode. I PRed every climb by a large margin. And I wasn’t trying to smash boundaries. I was just riding an efficient bike, turning bigger gears and going faster than normal.
In smooth sections the EVO descends how you’d expect. Fast. Agile. Carvy. My slalom runs … so beautiful that bystanders were weeping. Jumping … snappy and perfect. Nothing stands out specifically; the whole package is just plain dialed in.
Descending the gnar. If I was on a smooth XC trail it would have been full impunity attack mode. Since I was riding “enduro gnar” on light tires, I took it easy. 1) It was super fun. Short travel bikes are a flow trigger; they force you to really pay attention and engage with the trail. 2) According to Strava, I ran decent times compared with my StumpDuro. That blows my mind. 3) I used nowhere near all of the bike. With some experience on the EVO, plus some tire insurance, I’ll bet I could haul ass.
Ride time was fast. When you lose a few seconds on downhills but gain minutes on uphills, that makes for a faster ride than the StumpDuro. It was funner in these ways: 1) Super attentive, agile ride. 2) Enjoying the climbs In a new way. Like, I was passing people uphill. That seldom happens.

WHAT WOULD I CHANGE?

If I had one of these bikes (and I do indeed want one), I’d change these things, in this order of importance.
1) Bar and stem. As mentioned above. I can’t ride this bike with the stock setup.
2) Grips. I’d run my favorite SQlab 70x grips.
3) Seatpost. The stock dropper has 125mm of travel. I’m used to 175mm … and I really missed it on the steep sections.
4) Brake rotors. For riding at Left Hand, I’d want a 200mm front and 180mm rear. That said, the stock 160s worked fine. The seatpost was a much bigger limiting factor.
5) Tires. I was worried the stock tires would be sketchy, but they were actually really good (and wow they roll fast). I mostly worry about flats, so I’d either try an XC tire liner or tires with heavier casings. But I would hate to make this bike heavy and slow. So I dunno, I might run these tires until they die.

WHO’S THE EPIC EVO FOR?

1) The many Epic owners who don’t race, but who want light, efficient bikes for general riding.
2) Shredders who want to climb faster and who enjoy a sharp, engaging ride. Me.
3) XC racers who attack realer, rougher trails.
4) Dentists who want the best (and who shred).
To sum it up: This bike is rad. I’d love to make one mine.
Huge thanks to Jason Emmanuel and Specialized Boulder for the loaner.
https://www.leelikesbikes.com/wp-content/uploads/2018/08/leelikesbikeslogoheader.jpg 0 0 leelikesbikes https://www.leelikesbikes.com/wp-content/uploads/2018/08/leelikesbikeslogoheader.jpg leelikesbikes2020-07-01 12:55:312020-07-01 12:59:54Riding the 2021 Specialized Epic EVO Pro
3 replies