While many dirt jump spots are still being plowed, more and more communities are dedicating spaces to our favorite form of self expression. Here are three success stories. How it started: In November 2002 14-year-old David Waugh emailed the mayor asking for a permanent dirt jump park.

What made it work: Waugh and a local grad student enlisted the help of a bike club, an engineering company, a construction company, Kona Bikes and a bunch of volunteers. “This park was successful because we gave them a challenge and, boy, they met it,” said Leslie Bryson of the parks and recreation department. “They got the people, the materials and everything.”

The design: A start hill with four lines of rhythm, small to big, all roll-able. This site caters to beginning and intermediate riders.

What’s going on: The jumps were scheduled to be finished last September, but they were ready for the Whatcom Independent Mountain Pedalers (WIMPS) big air contest in June. 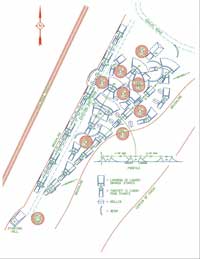 How it started: These jumps, named for rider Jason Sunday, were built in a community green belt about three years ago. The city found and bulldozed them in January 2004. Two weeks later, four riders including Sunday were caught rebuilding and were arrested.

What made it work: Supporters of the jumps — led by a non-riding member of the neighborhood alliance — convinced the city that the jumps do more good than harm. The site was redesigned to control runoff, preserve tree health and eliminate dangerous holes near the jumps. Instead of digging, riders will import dirt.

What’s going on: Rebuilding started in November, and riders are hitting the new sweetness as you read this.

How it started: Riders have been lobbying the city for a jump park for more than six years.

What made it work: Shane Huntoon, a track designer for the National Bicycle League, took over the design. He convinced the city that a free-form park would lead to the kind of uncontrolled building that shaped Calabazas. The solution, he says, is to adopt one design and funnel all changes through one person — him. Huntoon built and runs four other East Bay tracks. This experience gave the city the confidence they wanted.

What’s going on: The building contract was awarded in December, and construction was scheduled to begin in January.

What they have in common

– A key person with the passion to see the project all the way.
– Professionalism in working with the city and meeting its requirements.
– Support from riders, parents and neighbors, as well as area riding clubs and businesses.
– Patience. As Huntoon said, many of the kids who first asked for a Pleasanton BMX park have left for college.

Are your dirt jumps safety certified?Benefits of flat pedals
Scroll to top