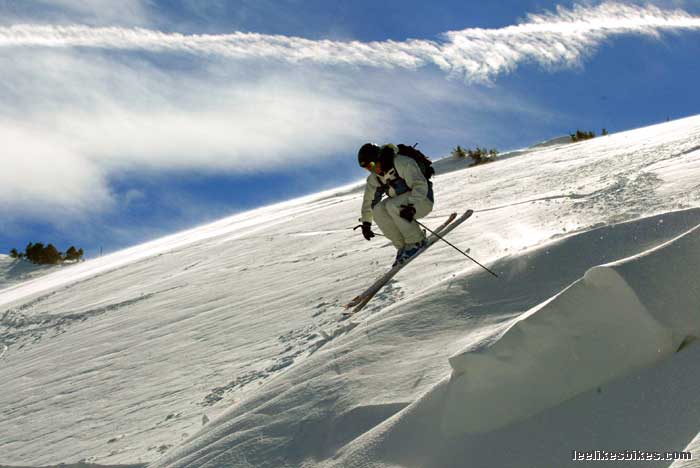 The mission: Hit a 60-foot-plus cliff drop that Noah has been scoping out at Berthoud Pass.

The conditions: Sunny and 70 degrees on the plains. 50 degrees in the mountains. The snow was going fast.

The reality: Not enough snow for the mega huck — unless you’re down with landing on rocks. So we hiked up from the pass and got into some lighter-duty funny business.

Atop the climb, the wind-packed slope encouraged some fast turnery.

Nadia hooks it up.

Icing on the cake (of life)

The corny snow looked like icing drizzled on a tiered cake. One of the little terraces seemed like a nice place to launch. But, then again, which place isn’t a good place to launch?

Noah did a nice little 360-to-faceplant in the punchy snow. No sense seeing the landing, eh?

Nadia made a nice turn then charged the drop, hands forward and all business.

Palmer shows the kind of poise only Fate Clothing can give you. (He works there.)

A year ago this week, Palmer was driving over Berthoud pass in a huge snowstorm when his car slid into a bank. While he was digging his Subaru out, a snowplow knocked him 30 feet out in to the snow — and completely out of consciousness. Since the accident he’s been struggling to recover from his concussion, and he’s still trying to find his former aggression.

Jeff led us to a rock promontory that drops 15 or 20 feet to a steep, choppy runout. This was the test. He and Palmer sidestepped to the launch pad and talked about takeoff speed, line choice and ski angle. The coaching was over. Now it was up to Palmer. He stepped back up to the run-in. We could all feel his anxiety. We wouldn’t have blamed him if he bailed, but we all knew he could do it. All were quiet. Very slowly, Palmer pushed off and slid right off the icy tongue.

Palmer told me this is the first time he’s actually sensed his position in the air and made corrections: a huge breakthrough for any jumper. He wasn’t in the back seat rolling up the windows, nor did he plant his tips and buck it up. He stayed loose and perfectly balanced, and he nailed it. Stoked!

Noah decided to hip it.

Jeff had been taking it easy all day, playing the role of guide and coach. With all the fanfare he would give to wiping his nose, he uncorked this little bit of tastiness.

Noah heads for the shuttle pickup spot. One cool thing about the mountains: You don’t wait long for a ride.

Out ridingThe Corkscrew of Death
Scroll to top