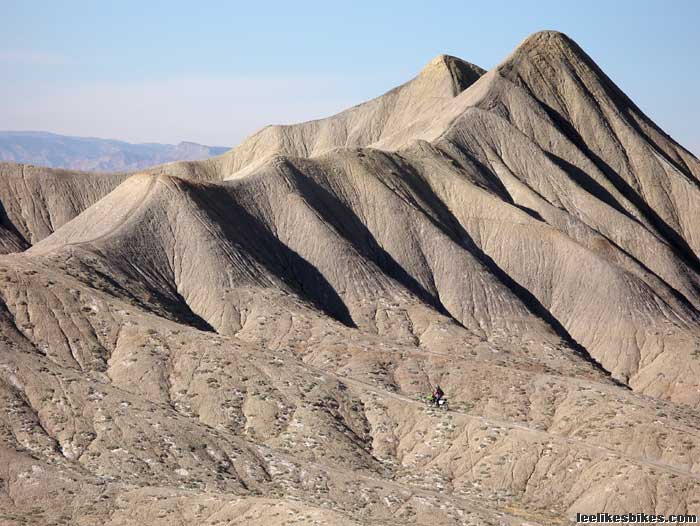 If you’re a bitter person, don’t read this. It’ll only make you angry. For the rest of you, behold three days and three adventures.

Gestalt: An oversized skate park for motorcycles. Steep hills drape off the Book Cliffs, and trails wander all over them. The starkness and steepness really intimidated us. It looked like Mars, but with full Earth gravity to punish mistakes. We started mellow — looking for trails we could ride. But after a couple hours we were braaping up steep hills, bombing down them and ripping through sandy washes. What fun.

I’ve done this one on a downhill bike (story and photos, and it was fun but pretty flat and very pedally. The mighty CRF450X made the main Jeep road seem like one long, ripping downhill: We soared off ledges, blipped over faces and skated across baby heads. Whee!

A few miles from the end, the trail turns to singletrack and snakes along the cliffs above the Colorado River. This is where most moto riders turn back. Not us. We downshifted and picked our way along narrow ledges. There is no down. There is no right. Just forward. La, la, la.

At one point the trail dropped off a steep ledge, fell into a narrow switchback, then clattered over 100 feet of rocks to Jackass Creek. Time to carry some motorcycles. A couple guys tried to ride sections, but they fell onto jagged rocks — pinned under big machines, engines running, wheels spinning, body plastic squishing into their wristwatches. Yikes. But I noticed a straighter line. Fireman Jeff helped me lower my moto over the first ledge then turn it sideways. “Jeff,” I trembled, “I’m not afraid.” I put the beast in neutral, coasted across the fall line, fired up the engine then dropped straight down the rock section. Bap, bap bap — easy!

Random: As I sat at the bottom waiting for my group to braaap over an outcropping, mountain biker after mountain biker struggled down the section. One rider looked unusually poised, and I was like, “I know that riding style …” Well, guess who? It was superbro’ Brandon Sloan himself, in town riding with his girlfriend Sondra. Amazing. We all met at the bottom of the trail and we moto guys towed our MTB buddies back to town.


Gas up, eat lunch then back to work …

This classic mountain bike trail was originally laid out for motorcycles, and I must say it’s awfully fun with an engine. On a bike the undulating trail is sprint, sprint, sprint. On a moto it’s twist, twist, twist. It’s still a great workout, but you get way more flow. Just follow the white stripes up, down, left, right, up, down, left, right. Yes, that’s the Colorado River 200 feet below the patch of off-camber sandstone your tire is sticking too, but don’t look that way. Follow the white stripes.

Day three and tiredness was in the air. We buzzed through town to Kane Creek Road then blasted up a fast-then-rocky dirt road to Hurrah Pass. Awesome view. Dice on the way back down. Explore another canyon. Eroded Jeep road crossing washes and outcroppings. Third gear pinned in the open sections; tip-toeing in second through the rocks. Luke went OTB and cracked his engine case. Time to tow a motorcycle.

Jeff and I continued up the canyon and found ourselves repeatedly crossing a cold stream. We turned back but somehow lost our way. Jeff entered a 100-foot crossing that did not look familiar, and several things happened: 1. Surface ice cracked around him. 2. His bike sunk deeper and deeper. 3. The water washed over his front fender and up to his seat. 4. He pinned it. 5. He made it to the other side. 6. His engine died. Too crazy. I found another way around.

Cold and a bit shaken, we absolutely pinned it back to town — full speed, full focus. Rat-tat-tatting over the rocks, carving through the sand, slithering across stone marbles at 80-something miles per hour. We’re talking about racing the Baja 1,000 in 2006 or 2007. The training has started.

Getting into dirt jumping4X and slalom start questions
Scroll to top