This was originally posted March 14, 2004 — my first winter in Colorado. You’ll see Rufus rocking strong with all four legs.

Backcountry skiing seems pure, like a cross country mountain bike ride: Just haul yourself up a mountain, have a snack then carve down perfect, untracked powder. You have no lift lines and only the bozos you bring with you. 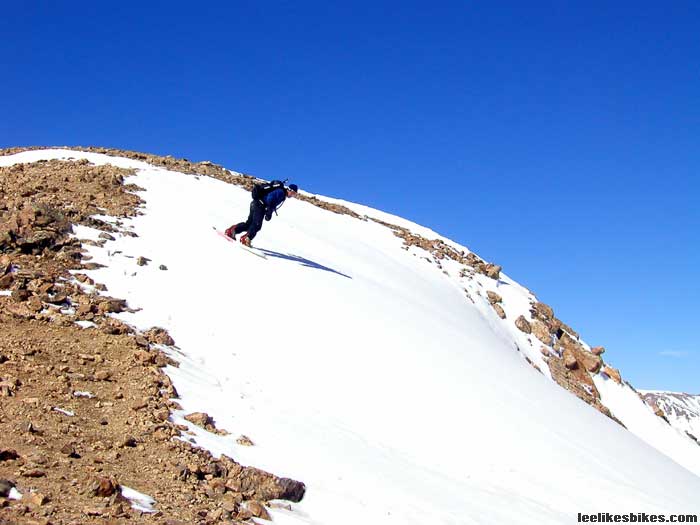 The only bummer is avalanches. People die in the backcountry. The day after Christmas, three snowboards bought it in Utah. You can see a full report on www.csac.org. The diagram at right shows where everyone stood when the snow struck — and where they or their bodies wound up. Scary stuff, but part of the backcountry world.

This week my bro’s Brian Holmes and Mark Garcia gave me my backcountry baptism. In three sessions we experienced every sensation from dizziness to exhilaration to terror.

Day 1: Almost the last day ever
We parked on the side of I-70, just before the Eisenhower Tunnel, right across from Loveland Basin Ski Area. As we geared up, cars zoomed by on the freeway. So this is backcountry?

We lashed our skis and boards to our packs and started walking straight up. Our boots punched through the top crust and, and we sank to our crotches. After we struggled up the first pitch, we put on our skis and skins, which made things easier but by no means fast. While I tried to round an icy switchback, both skis let go and I slid straight backward. “Are you OK?” yelled Brian. “Yeah,” I said, “my crotch caught a tree.” Thank goodness for crotches.

In my fantasies I saw myself cruising up a windswept ridge, framed by blue sky, steadily approaching a picturesque peak. This was not it. This was really hard work, with lots of stopping, changing the climbing lifts on the bindings, falling into tree wells and wrestling with the gear and my own carcass. Finally, we reached a clearing. Untouched snow blanketed the hill as far up as I could see, with a few rocks and trees to make things interesting. All I wanted to do was find a clear pitch and climb

As soon as we stepped onto the open snow, it crumpled under us. This is a classic sign of unstable snow and high avalanche risk. The snow experts agreed this looked pretty sketchy, but that we could go ahead, as long as we stay close to the trees.

We climbed. It was pretty cool, just huffing up the slope, heart pounding, legs working, with Rufus running around checking with everyone. As we went, though, in the distance we heard bombs and the ensuing avalanches. They weren’t on top of us, but they were close.

One foot in front of the other, up and up we went. Ruuummmble — we heard and felt snow moving in a nearby drainage. My hair stood on end and my muscles tightened. Rufus sat down right where he was. Next thing — wuuuumph! — the snow all around us settled. This is a serious danger sign: The top layer drops through the rotten layer then the whole mess breaks free and slides on the hard bottom layer. 1-800-AVALANCHE, baby.

“Daddy, why aren’t we over there?”

“OK Lee,” Brian called from a ways up the hill, “we’re going to turn around here.” He was being cool, but I could sense the urgency in his voice. I was like “Holy shit, right now? Should I ski down with my skins on?” I was ready to get the f— out of there. “No,” he said, “get your stuff together and get ready to go down. Go between those trees over there. That’s a pretty safe place.”

I started to freak out. Holy crap, a wall of snow will bulldoze down the mountain, break my back and bury me. A mask of ice will form around my face, and I’ll suffocate right here before anyone can dig me out. And the Booh, what if he gets caught? We had to get out of here. I stuffed my skins in my pack and locked my binding in about two seconds. The boys huddled beneath a tree of their own, removing their skins and trying to reassemble their split boards, which weren’t cooperating. They cursed. I looked up there and saw that my guides, a couple backcountry experts, had very strained looks on their faces. I about shat my pants. “This is it,” I promised myself, “When I get out of here I’m done with this sport.”

We got our stuff together and rode down the unstable crust backcountry style: one at a time, from one safety zone to the next. Soon we were in the trees and relatively safe from roaring white death. Now it was just a matter of picking our way through crappy snow and supernarrow lines. I was so shaken up I could barely make a turn, but I didn’t care. I lined up a straight shot, stopped however I could, then lined up the next, all the way back to the car.

I struggle in the trees. Rufus Doo comes to the rescue.

I’m all for high speed and gnarly terrain, but this avalanche thing was just too much. I retired from backcountry right then and there.

Of course, this is me we’re talking about. After a sandwich and some caffeine I decided it was worth another shot.

The next day we parked at Loveland Pass (11,990′) and hiked westward along the Continental Divide. The boot pack was easy to follow, and the bluebird of happiness was singing a nice little tune — the tune of powder turns!

Not only am I a Californian, I’m also a full-on ski dork.

Hiking the Divide tempted my aerobic tummy with the taste of nuts and honey. Let’s hope this counts toward riding fitness.

Sweeeeeet! We had to do it again.

Here’s a little video of Mark and Brian on that descent. (2.5 MB Quicktime)

When we skinned back up for Lap 2, our elevation gain and heart rates were the same: 300.

After the Loveland pass session I took one day “off” — just an hour of jumping, then another day “sort of off” — an hour of jumping followed by some pukeworthy sprints. On hindsight, I should have sat around eating whale blubber.

This section was steep. Up there by the red arrow? Fuggedaboutit …

Mark drags his carcass up the last pitch. Next stop: 12,800′. Our heads were spinning, and if it weren’t for the poles we’d all have fallen off the mountain.

Mark and Rufus Chow Guy are almost topped out. I wasn’t really behind them; I went to the top then came back down to get this shot.

“Daddy daddy daddy, this is so cool!

“Mark Mark Mark, this is so cool!

The descent was sweet. Around 35 degrees pitch, perfect corn and no tracks. Here’s a little video. (4.6 MB Quicktime) As soon as we finished, some snowmobilers rode over and tore up the place. It was cool of them to let us get clean turns.

Looking back on the conquest.

“Rufus, which way should we go?” “Well, I bet the north-facing chute is crusty. I say hit the south side.”

Rufus found a sweet line. Check out that huck!

I found a sweet line, too. Check out the last scene of the above video.

The verdict
Anything that involves getting stronger, being in the mountains and hauling ass has to be fun. As long as you avoid avalanches.

I haven’t done much backcountry skiing since. While it’s very cool, I’m not avalanche savvy, and neither are the local guys I was going with. Avalanches are gnarly!

Rufus has since lost a leg to cancer, but he still has his Mountain Dog spirit. Go Rufus Go!!!

Again: Should I change my stem and bar?What’s up with the Sea Otter Super D?
Scroll to top